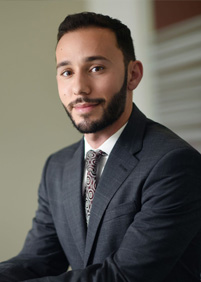 Mr. Simon received his undergraduate degree in finance and economic policy from New York University’s Leonard N. Stern School of Business in 2009.  He received his J.D. from Pepperdine University School of Law and his Certificate in Dispute Resolution from the Straus Institute for Dispute Resolution in 2014.  While in law school, Mr. Simon served as an editor for the Journal of Business, Entrepreneurship and the Law, and served judicial externships to the Honorable Robert N. Kwan, United States Bankruptcy Judge for the Central District of California, and the Honorable Valerie B. Fairbank, United States District Court Judge for the Central District of California.  After law school, he served a judicial clerkship to the Honorable Robert N. Kwan from August 2015 to March 2017.

Mr. Simon currently serves as a director for the Orange County Bankruptcy Forum and was recognized as a Southern California Rising Star by Super Lawyers in 2020 and 2021.